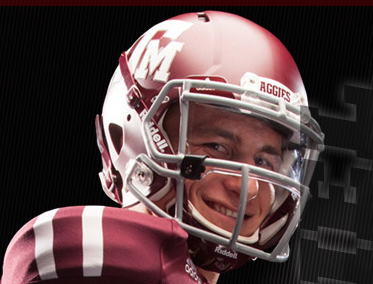 Johnny Manziel’s football bravado earned him headlines in the Hill Country as a teen, but Jerry Loggins first observed his grandson’s incomparable competitiveness a decade earlier on fishing trips. When counting bass on a boat in the middle of an East Texas lake.

“If he caught more fish than I did, everything was rosy,” Loggins said, chuckling at the memory of a pint-sized Johnny reveling in the conquering of his finned foe. “But, boy, he’d get mad if I caught more, and when we’d get back to the house, he’d shut the door to his room and you wouldn’t see him the rest of the night.”

Why? To ponder whipping his grandpa at a competition – of course others consider fishing a means of relaxation – requiring as much luck as skill.

Manziel, Texas A&M’s freshman star quarterback who’s earning mention as a Heisman Trophy candidate, rose to prominence as a human highlight film at Kerrville’s Tivy High. But his unabashed competitiveness bloomed in Tyler, where he was born and raised and the Manziel name is prominent.

A great-great uncle, Bobby Joe Manziel, was a boxer known as “The Syrian Kid,” and also a sparring partner with the legendary Jack Dempsey. Bobby Joe earned his own legendary status in East Texas as a prominent oil wildcatter.

Johnny was born in 1992 to two diehard golfers, Paul and Michelle Manziel, who were sweethearts at Tyler’s Lee High and each on the school’s golf team. Through his love of golf Paul later became friends with Jacky Lee, a former A&M golfer who also coached a powerhouse Pop Warner football team dubbed the Tyler Hurricanes.

Lee picked up on Johnny’s extraordinary athleticism even as a skinny 8 year old, but Johnny’s mother and grandmother, Lyana Loggins, were insistent the youngster would not play football while in elementary school.

“I’d always see Johnny playing basketball and baseball with my son, Ross,” said Lee, whose father, also named Jacky Lee, was a one-time Houston Oilers quarterback. “But his mother didn’t want him playing football because she was afraid he’d get hurt. So he would come to our games and just watch.”